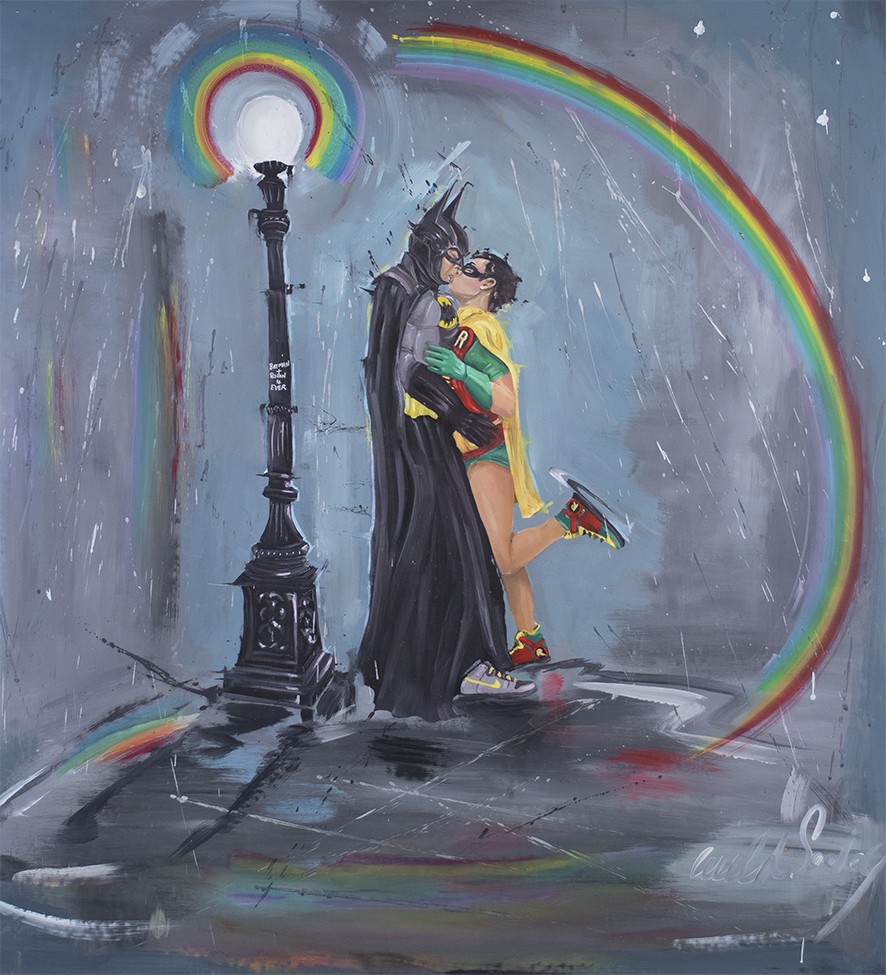 A celebration of this day is marked by our hand-picked collection of artworks that we believe support and give power to the LGBTQIA movement, this can be viewed HERE.

LGBT pride is the promotion of the self-affirmation, dignity, equality, and increased visibility of lesbian, gay, bisexual, and transgender (LGBT) people as a social group, now often associated as the full term LGBTQIA+.

Ranging from solemn to carnivalesque, pride events are typically held during Pride Month or some other period that commemorates a turning point in a country's LGBTQIA history, some pride events include LGBTQIA pride parades and marches, rallies, commemorations, community days, dance parties, and festivals.
The 1950s and 1960s in the United States was an extremely repressive legal and social period for LGBTQIA people. In this context American homophile organizations such as the Daughters of Bilitis and the Mattachine Society coordinated some of the earliest demonstrations of the modern LGBT rights movement. These two organizations in particular carried out pickets called "Annual Reminders" to inform and remind Americans that LGBTQIA people did not receive basic civil rights protections.
Early on the morning of Saturday, June 28, 1969, lesbian, gay, bisexual, and transgender persons rioted following a police raid on the Stonewall Inn, a gay bar at 43 Christopher Street in Greenwich Village, Manhattan, New York City.
The Stonewall Riots were a series of spontaneous protests by members of the gay community in the early morning hours of June 28, 1969.
Patrons of the Stonewall, other Village lesbian and gay bars, and neighborhood street people fought back when the police became violent. The riots are widely considered the watershed event that transformed the gay liberation movement and the twentieth-century fight for LGBT rights in the United States. As was common for American gay bars at the time, the Stonewall Inn was owned by the Mafia. While police raids on gay bars were routine in the 1960s, officers quickly lost control of the situation at the Stonewall Inn. Tensions between New York City Police and gay residents of Greenwich Village erupted into more protests the next evening and again several nights later. Within weeks, Village residents organized into activist groups demanding the right to live openly regarding their sexual orientation, and without fear of being arrested. The new activist organizations concentrated on confrontational tactics, and within months three newspapers were established to promote rights for gay men and lesbians.
The proposition that a demonstration be held annually on the last Saturday in June in New York City to commemorate the 1969 spontaneous demonstrations on Christopher Street was made and the demonstration was to be called CHRISTOPHER STREET LIBERATION DAY. No dress or age regulations were to be made for this demonstration.
Christopher Street Liberation Day on June 28, 1970, marked the first anniversary of the Stonewall riots with the march, which was the first Gay Pride march in New York history, and covered the 51 blocks to Central Park. The march took less than half the scheduled time due to excitement, but also due to wariness about walking through the city with gay banners and signs. Although the parade permit was delivered only two hours before the start of the march, the marchers encountered little resistance from onlookers. The New York Times reported (on the front page) that the marchers took up the entire street for about 15 city blocks. Reporting by The Village Voice was positive, describing "the out-front resistance that grew out of the police raid on the Stonewall Inn one year ago".